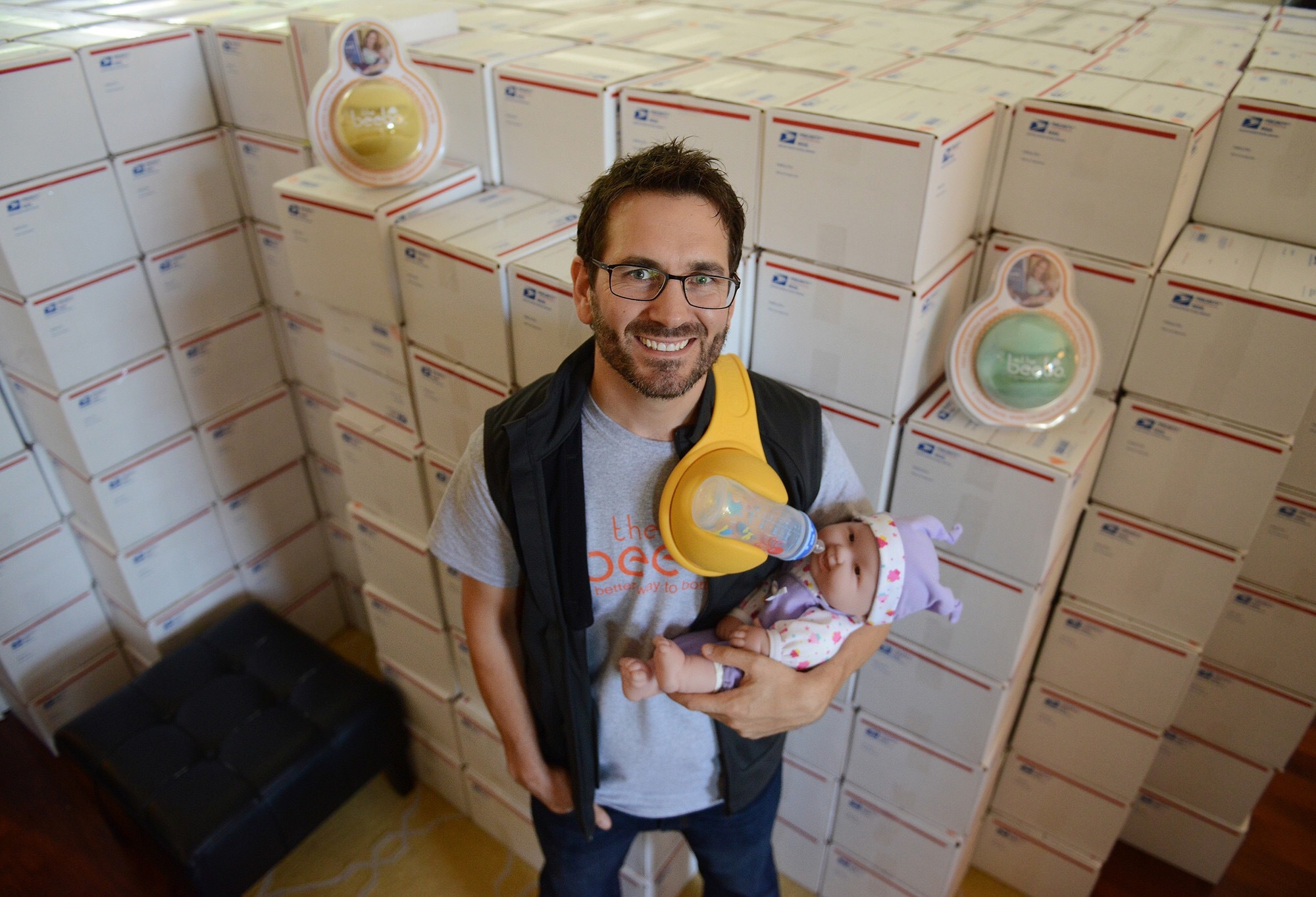 Martin is 38 years old (born May 1977)He was born in Middlesbrough, England, but now lives in South Florida with his wife and two children.

He has an electrical engineering background.

Martin designed the Beebo to enhance the feeding time between him and his baby boy around 5 years ago.
1) How did you come up with the idea of Beebo?

The idea was initially born when my son was a baby. When he was around 7 months old, he started to really struggle to finish his bottle, and was starting to have nutritional issues due to this. He would get easily distracted during feeding time, and it was a constant struggle to feed him during mealtime. I noticed that he was his most relaxed when I would read a book to him, so I came up with this idea of making something to hold the bottle for me so that I had a free hand to hold a book and read to him during feeding time. I designed the first Beebo and built it in my garage. It worked perfectly and solved our issue. We then started to use it at meal times so we could all eat as a family, both at home and in restaurants, and were blown away by the reaction to the product. People loved it! All of a sudden we were moving into patenting, prototyping, product improvements and website design. I applied for Shark Tank right as we were launching the product (Feb 2015), and it all exploded from there.

2) What was it like to get the two sharks Ashton Kutcher and Lori Greiner onboard?

Lori and Ashton are both amazing. They give there input where necessary and are big supporters of the product. They were the two Sharks that I wanted to make a deal with, and we closed on the EXACT deal that I predicted we would. It made the most sense for everyone involved.

3)How have they been as a mentor?

To have them on the team and use them as a sounding board has been amazing. The road of bringing a product from just an idea into reality is a very complicated one with many pitfalls. To have them and their teams available for guidance and support is incredible. Lori knows retail very well and has had lots of input on our new colors and packaging. We are gearing up for a nationwide retail rollout of the Beebo (I am actually in a flight to a meeting with them right now!) which I’m sure will be a huge success.

4) When it came down to choosing between Kevin or Lori and Ashton was it the equity that swayed your decision?

No. Kevin is an incredible investor, and a really great person (even though he comes across a little harsh on tv!), but the combination of Lori and Ashton was perfect for the Beebo. Finance and equity is not everything. I was looking for strategic investor that brought to the team more than just funding. They were my ‘dream team’ going into the ‘Tank’, and they were the two I was looking to make a deal with.

5)Where do you see the business going in the near future?

We will be rolling out into retail here in the US shortly, then looking to launch the product in other relevant countries. The Beebo is very unique, and is destined to be a global success. We have had sales/distribution inquiries from all around the world. I’m excited to see how far we can take it. We will also be looking at new products that compliment the Beebo in order to build a brand and not just a singular product.

6) Could it be said that the Beebo is an replacement for a parent as there is that connection is using a device such as the Beebo?

No. The Beebo is designed to enhance the precious moments of bottle feeding between baby and parent. It encourages more bonding, not the opposite. The user needs to be holding the baby close in order for the Beebo to function. We promote enhancing these precious moments by giving the parent the ability to read to their baby, massage/caress their baby or even enjoy family meals together.

7)What advice would you give to aspiring entrepreneurs?

Be ready to work very hard! Think through every decision very thoroughly. Do not borrow so much money that if your venture fails, you would not be able to recover. Surround yourself with positive people that you can learn from, and be ready to hear the word “No”, then figure out ways around it. I think I’ll quote Lori Greiner here; “Entrepreneurs. The only people that will work an 80 hour week to avoid working a 40 hour week”. Your life becomes your business, and your business become your life. Stay grounded, be happy and remember you only live once.
We would like to thank Martin for speaking with us.

Jake Russell is the owner and founder of The Young Businessmen. Since its creation one year ago it has been funded and operated solely by him. Jake is currently running the website along with being a student. View all posts by jakerussell

One thought on “Interview with Beebo founder Martin Hill”